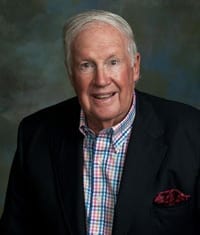 Paul is the third generation to be involved in the family real estate development business. The business was started as a construction company in 1907 by his Grandfather and originally based in Northeastern New Jersey. Paul opened a Florida office in 1983 and changed the focus of the business from office development to retail development.

From his former role as President, which is now filled by his son, Shields, to his current role as Chairman, Paul has successfully guided the company through two recessions. His vision and understanding of the development business has enabled the company to expand to three Florida offices while maintaining an office in New Jersey. Also, an office was recently opened in Atlanta, Georgia. Under Paul’s direction the company’s 20 person plus team has completed over 3,000,000 square feet of retail development and currently has numerous projects under development.

Paul was born in Jacksonville, Florida, and grew up in New Jersey. He attended The University of Florida majoring in the Department of Building Construction. His love of the outdoors especially beaches and water always kept him close to Florida. Today, Paul enjoys fishing and boating with his wife, Victoria, and family to include his Labrador retrievers. He is also a Director of the Florida Audubon Society.